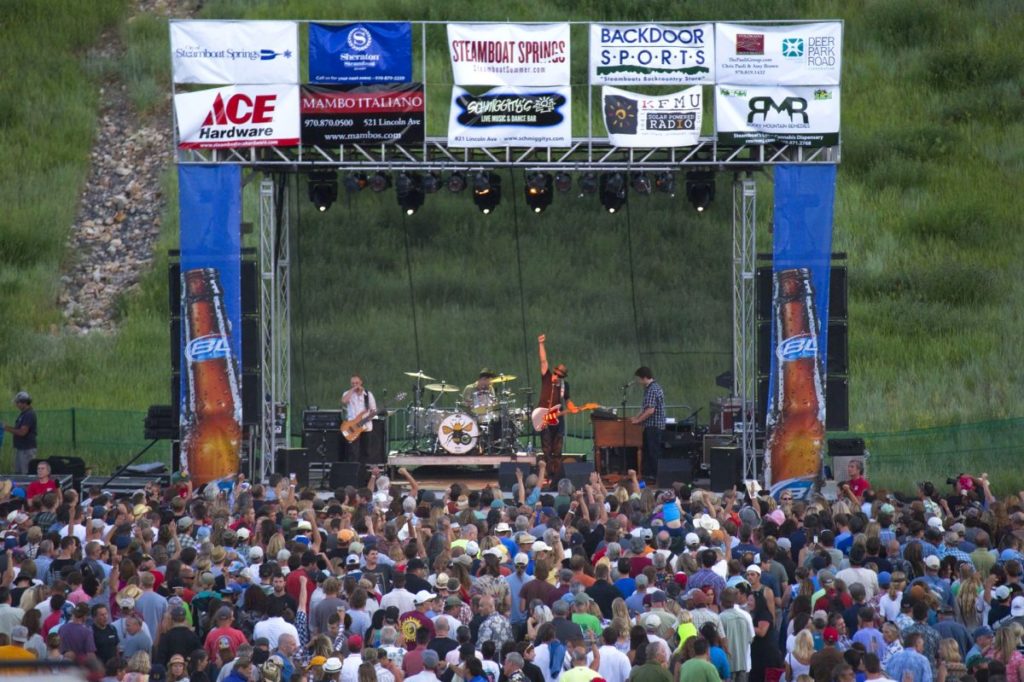 In Steamboat, at least one thing in life is free: outdoor concerts all summer long.

In the early ‘90s, a record store owner and a group of friends started hosting free concerts on the lawn of the Routt County Courthouse in downtown Steamboat with just a few hundred people. Thirty years later, this Steamboat tradition is still alive and thriving. The Steamboat Free Summer Concerts now hosts five concerts every summer for a total of around 25,000 fans. Featuring many genres of music, including pop-rock, funk, bluegrass, reggae and blues, these outdoor concerts, held at the base of Howelsen Hill, are a Steamboat summer tradition for locals, visitors, and people of all ages.

How do they do it? We were wondering the same thing. We caught up with Ted Carey, Steamboat Free Summer Concerts Board President, to find out.

Give us a little background and history on the Steamboat Free concert series. When, how and why did it start?
It was started in the early ‘90s by a record store owner, Joe Kboudi ,and his friend John Waldman, a talent promoter. Both of them are still involved 30 years later. Joe is our Director Emeritus and John is our talent buyer who does our bidding and negotiating with the bands. It started on courthouse lawn in downtown Steamboat Springs and eventually it moved, first to the base of Steamboat Ski Area, and then down to Howelsen Hill, which has been our venue since 2012. It’s a pretty cool spot right at the base of the ski jumps. It’s a city park and a great location right downtown. It’s very accessible as far as music venues go. I think everyone wants to know; how do you pull this off?
Steamboat Free Summer Concerts is a non-profit organization. We have some paid staff, but we have a very generous group of volunteers, including all of our board members. We are funded entirely by donations, sponsorships, and concession sales at our shows. A lot of people think we are affiliated with the ski area or the city, but we rely entirely on the generosity of our sponsors and donations. People might not realize that the cost of music is going up. Colorado is a desirable place to be, and this state has incredible thirst for live music, so bands get paid a lot of money to play in Colorado. It’s competitive to get bands that are highly desirable, and that’s why we work so hard to fundraise.

Who are some of the big headliners you’ve had?
There have been so many. We’re going on close to 30 years and there have been tons of huge names and memorable shows like Michael Franti, String Cheese Incident, Ziggy Marley, Chris Robinson, Trombone Shorty and Orleans Avenue, Sam Bush, G Love, Galactic, Little Feet and so many more. We have a complete list of past shows on our web site if people want to check it out. What’s the format for the concert series?
We typically do 5-7 shows every summer. Two years ago, we started a Labor Day event with multiple bands and we have an awesome lineup this year. We felt a need for an event here on Labor Day just because it’s such a beautiful time to be in Steamboat. This summer we’re also having the first double bill we’ve done in recent history on June 29.

What’s to look forward to in 2019?
We have a great lineup this year. We have one show we have not announced yet, but I know who it is and I’m very excited. We are going to announce it on June 10. One show we are super excited about Shinyribs on July 27. They won best band in Austin at the City Limits Music Awards. They’re an awesome time. If you haven’t seen or heard of them, check them out on You Tube. We’re all really excited about that one because we really get a kick out of bringing in bands people might not know of that will blow their socks off. What type of bands do you look for?
We do a lot of rock, blues, reggae, and a bluegrass. We’re definitely open to a lot of different styles of music. The events are 100 percent family friendly and we try to target artists we think people are going to love. We select bands based on the caliber of the music and what our organization can afford. These concerts are not put on by the resort or the city; we are a non-profit organization and 100 percent of the money people spend at concerts goes to support the music. We look forward to expanding our community partnerships and we’re really thankful for the support from the Steamboat community and the generous support of our sponsors.

Posted in: Arts and Culture, Community and tagged inFree Concerts