Lighting Up the Night Sky, On Skis 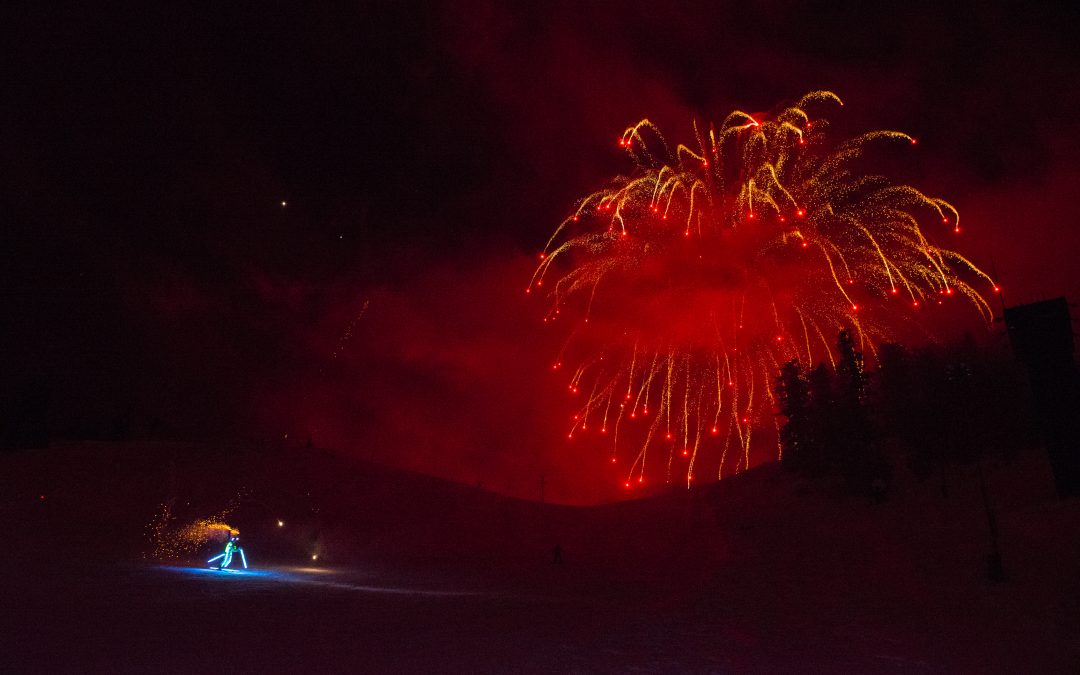 It’s not all fireworks for Blair Seymour, who in addition to devoting 20 years of her life as the Youth Program Director and Cycling Director for the Steamboat Springs Winter Sports Club, is now also the Creative Director for the Winer Carnival Night Show Extravaganza. “I’m the one running around behind the scenes with my radio cueing everyone that night,” she says of being the producer and choreographer of the nighttime show. “The funny thing is, we have no dress rehearsal, so you never know exactly how it’s going to turn out.” 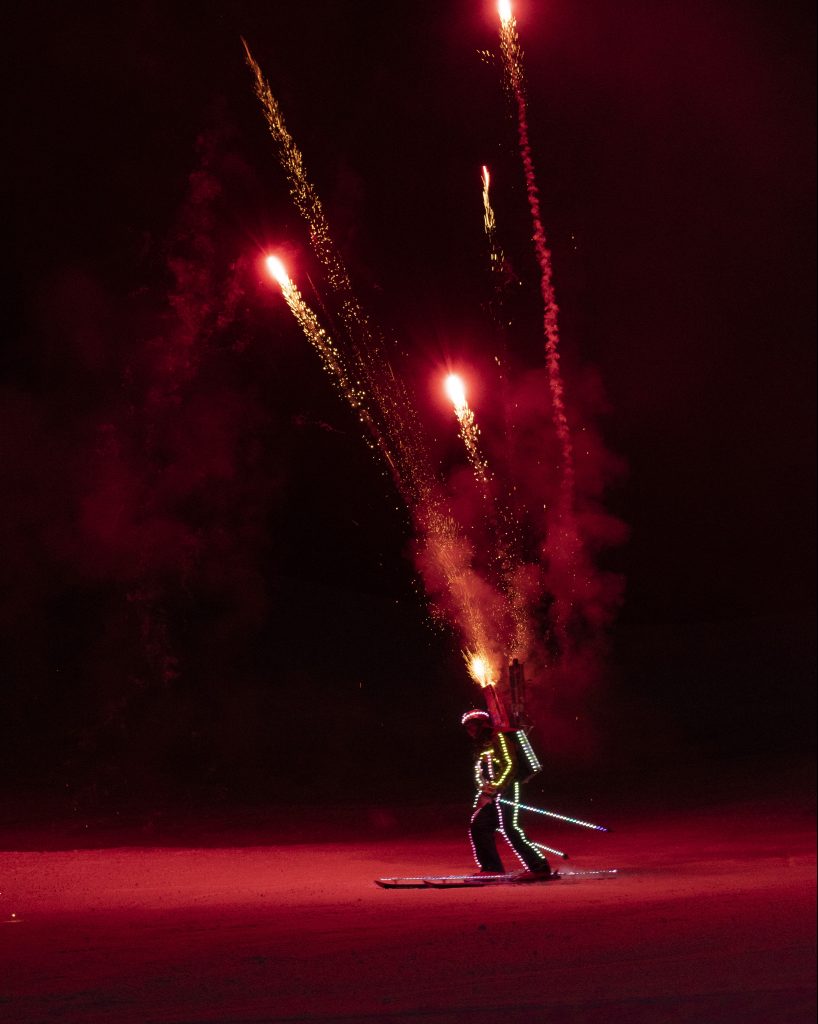 The Night Show Extravaganza is the pinnacle of the town’s long-standing celebration of winter, now in its 107th year. Winter Carnival was originally started by the SSWSC as a way to cope with cabin fever in the middle of winter, but over the years, it has evolved into a celebration of the town and its long-standing tradition. While the evening event is best known for its spectacular fireworks display and The Lighted Man, who skis down the mountain wrapped in lights with Roman candles shooting out of his backpack, there’s a whole lot more to it than that, according to Seymour. 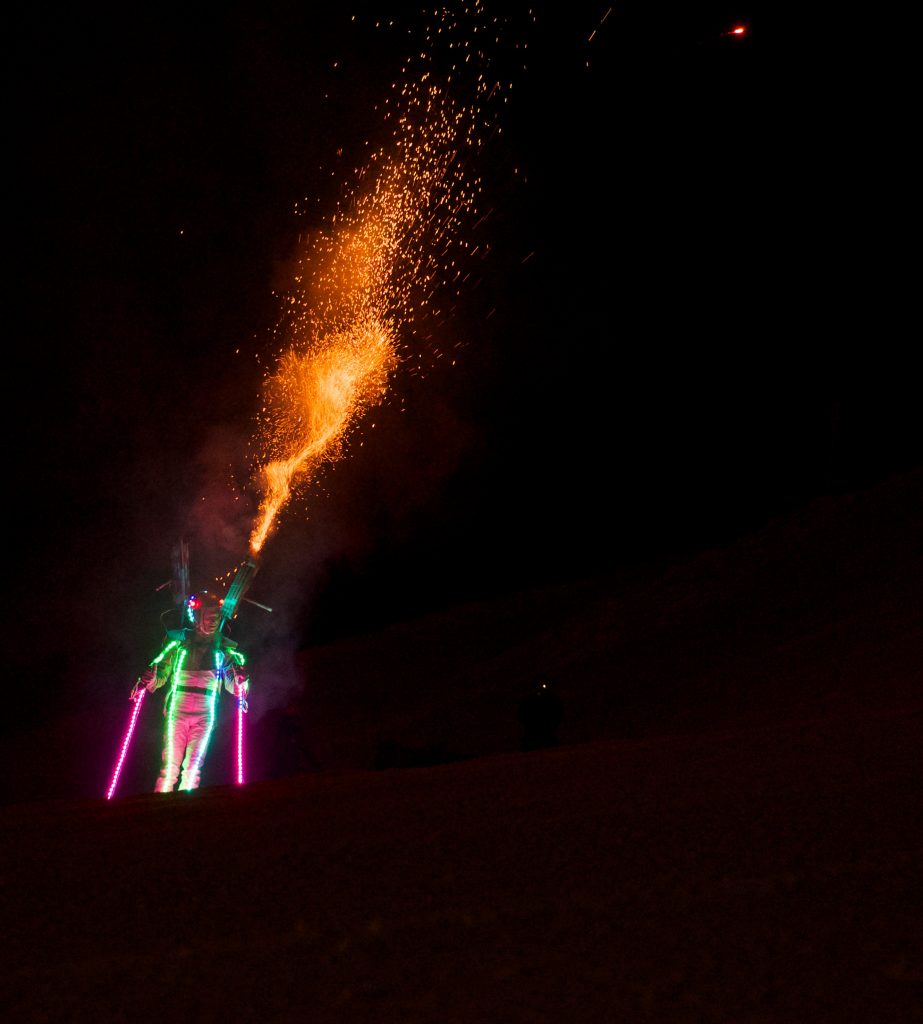 For starters, over 400 kids from SSWSC participate every year, and it’s considered a rite of passage to reach the age of five to be eligible to take part. Local kids look forward to it partly because they get to stand up at the top of Howelsen Hill and look down at a crowd of thousands of people who gather to watch the festivities; partly because they get a bird’s eye view of the fireworks; and mostly because at the age of eight they get to ski down carrying a real, live flare.

“We tried using glow sticks with the little kids, but then realized they don’t work when it’s super cold,” Seymour says, explaining that they spend a lot of time the week before the show going over safety protocol. “At least we know the flare will go out if it falls in the snow. But it’s so exciting for a little kid when they are finally handed a flare. It’s such a novelty for them.” Ponchos and vests that have been elaborately donned in LED lighting are also worn by the kids for a light show on skis that is rigorously choreographed and produced by Seymour. “I literally have these body diagrams for parents that show where the lights go and how you attach it. Many, many hours go into just prepping the lights.” 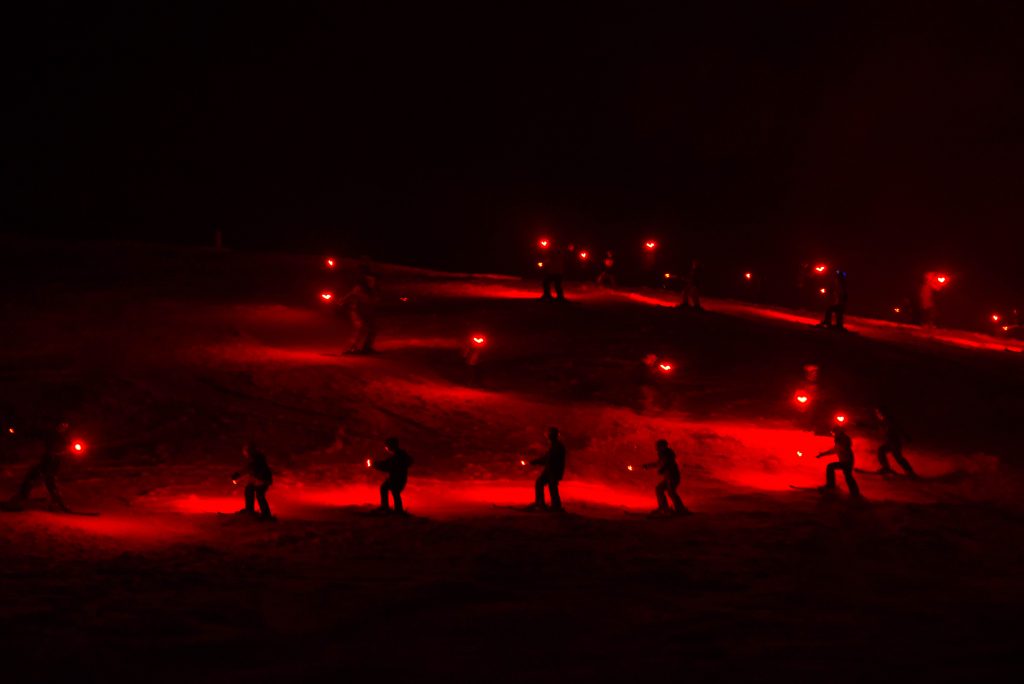 This is just one of several seemingly outlandish traditions that the show encompasses. The freestyle skiers slide a rail that’s on fire. The ski jumpers (age 14 and up) launch the 75-meter jump dressed up in LED lights in complete darkness. “Last year was the first time we did that, and it was so cool,” Seymour says. “They can’t see the landing, so they are literally launching themselves into the dark abyss and hoping they land, eventually.”

The ski patrollers jump through fiery hoops, one pulling a toboggan that’s—you guessed it—lit on fire. The most historically anticipated moment of the show is, of course, The Lighted Man, none other than Jon Banks, who will be participating in the event for his 49th year, continuing a tradition started by his father, Claudius, in 1936. 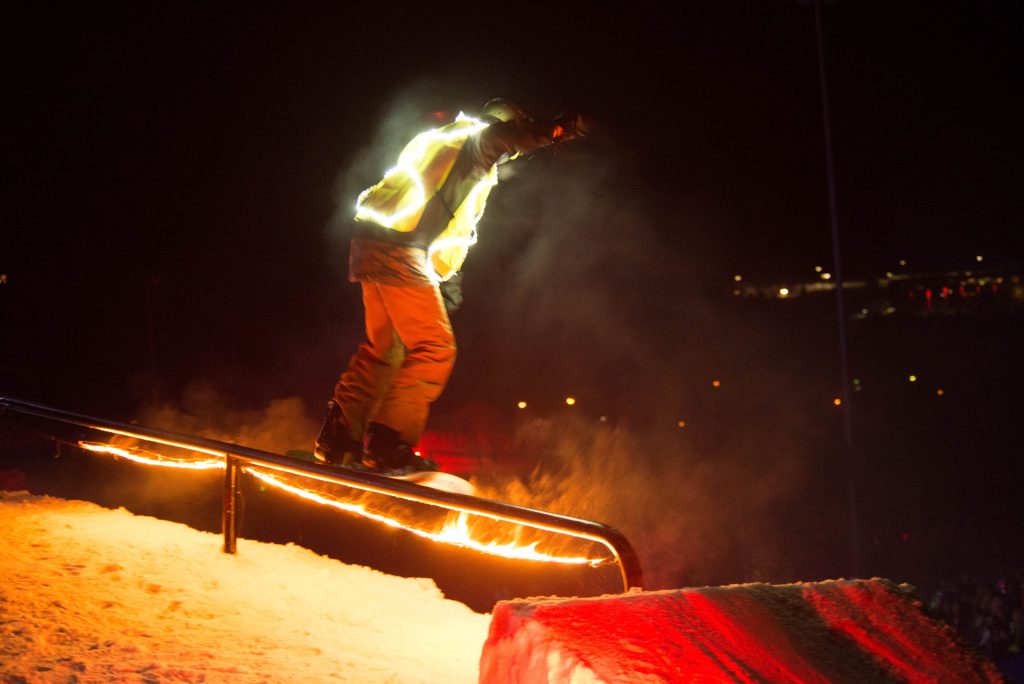 To top it all off, the Steamboat Fireworks team, led by the Borden family, will once again attempt to capture the world record for the largest single firework (they tried and were unsuccessful in 2019).

As soon as it’s over, it’s back to the drawing board for Seymour, who says she always immediately starts thinking about how to make it better the following year—and doesn’t stop. “I think about what worked and what didn’t work. All summer I’m thinking of ways that I can improve or be more innovative. It’s all about thinking outside the box.”

The Night Show Extravaganza is a fundraiser for SSWSC and spectators are asked to purchase a button for a $10 donation. 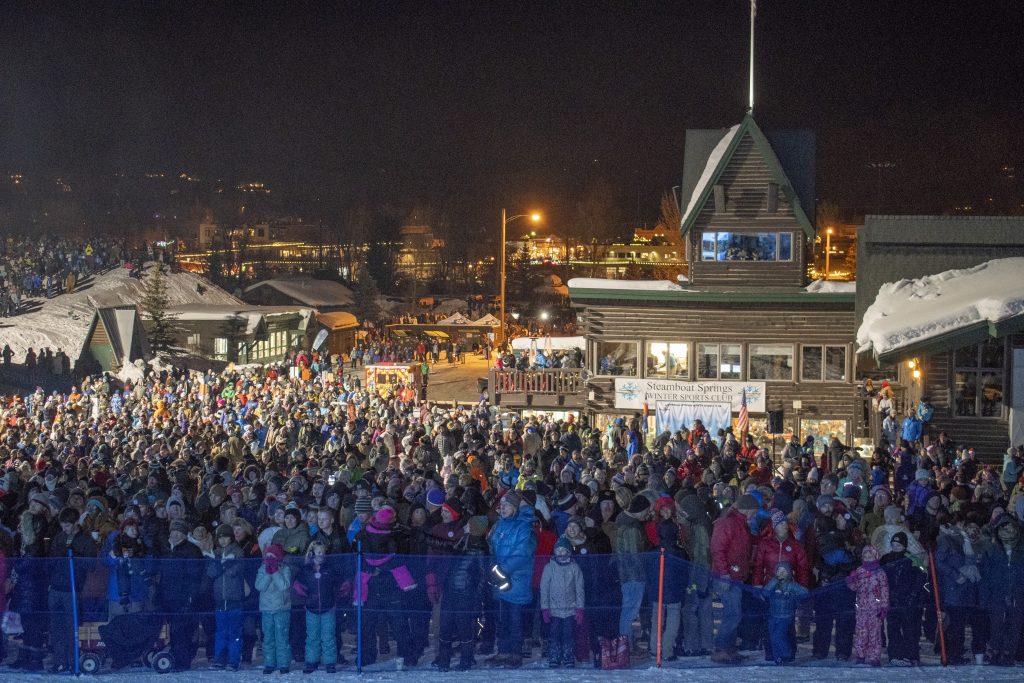 STEAMBOAT SPRINGS WINTER SPORTS CLUB – WHERE OLYMPIANS ARE MADE 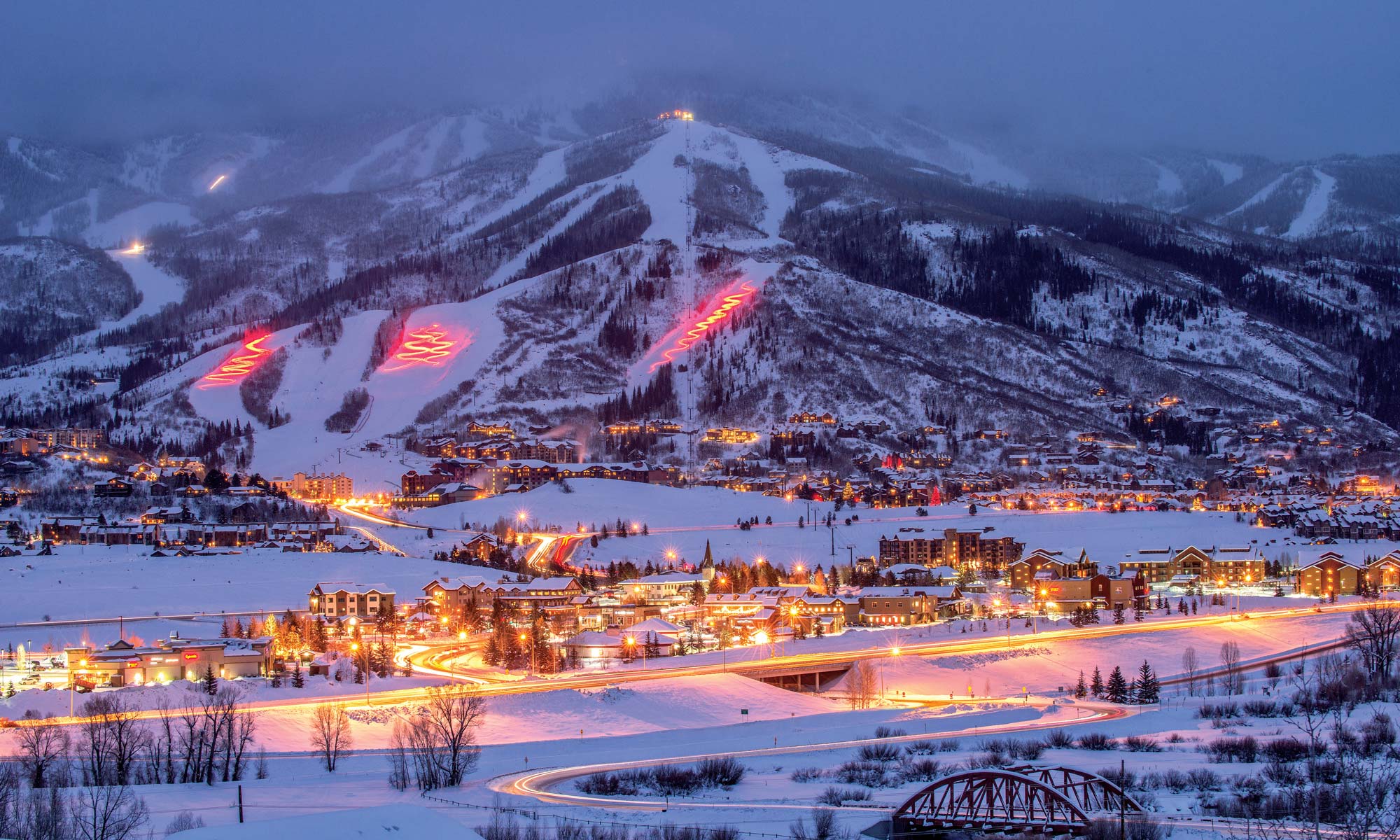