National home prices are improving.  Fiserv Case-Shiller projected March 4, 2013 that home prices across the nation will grow by 3.3 percent every year for the next 5 years. As we reported to you last month, 2012 was the first positive year for both home prices and home sales volume increases since the market crash. According to Case-Shiller,  2012 was as close to normal as we’ve seen since 1997!

Fiserv Case-Shiller Home Price Index measures the health of the housing market across the country.  It tracks data from repeat-sales of residential homes from 20 metropolitan regions and nationally.

This chart from Standard & Poor/Case-Shiller shows the national home price trend. Overall, there was a 7.3% gain in the fourth quarter of 2012 compared to the same time 2011. 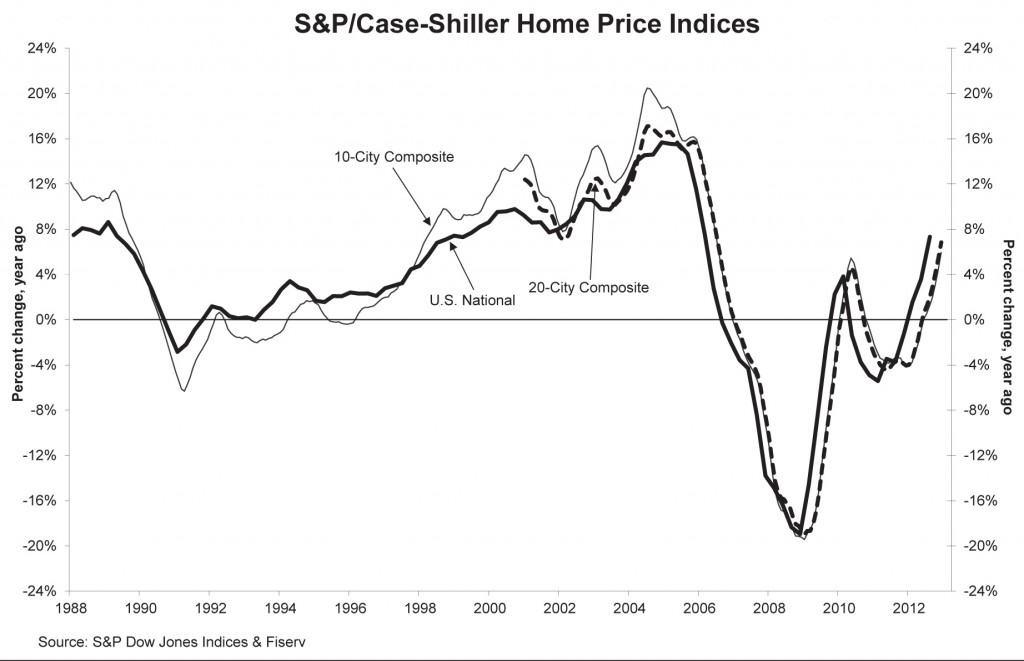 Foreclosures in Routt County are on the decrease. In Routt County, the 233 new foreclosure fillings in 2012 were far less than the 306 for 2011. In addition, the fourth quarter filings for 2012 were less than half for the same period in 2011. Foreclosures do affect our real estate market and with the number decreasing, this may be an additional sign our real estate market is improving. Gauging the market by foreclosures is difficult because of the many variables involved. As example, some foreclosures may take years to resolve while others cure themselves before they go to the bank or a third party.
Near the end of February, there were 19 bank-owned residential properties in the Steamboat Springs Multiple Listing, compared to 49 February 2012. So inventory is decreasing.

Find your Inspiration at Ponderosa Ranch in Steamboat Springs, Colorado